As robots continue to enter people's spaces and environments, it will be increasingly important to have effective interfaces for interaction and communication. One such aspect of this communication is people's awareness of the robot's actions and state. We believe that using high-level state representations, as a peripheral awareness channel, will help people to be aware of the robotic states in an easy to understand way. For example, when a robot is boxed in a small area, it can suggest a negative robot state (e.g., not willing to work in a small area as it cannot clean the entire room) by appearing unhappy to people. To investigate this, we built a robotic dog tail prototype and conducted a study to investigate how different tail motions (based on several motion parameters, e.g., speed) influence people’s perceptions of the robot. The results from this study formed design guidelines that Human-Robot Interaction (HRI) designers can leverage to convey robotic states.

Further, we evaluated our overall approach and tested these guidelines by conducting a design workshop with interaction designers where we asked them to use the guidelines to design tail behaviors for various robotic states (e.g., looking for dirt) for robots working in different environments (e.g., domestic service). Results from this workshop helped in improving the confusing parts in our guidelines and making them easy to use by the designers. In conclusion, this thesis presents a set of solidified design guidelines that can be leveraged by HRI designers to convey the states of robots in a way that people can readily understand when and how to interact with them. 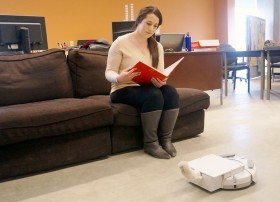