Puppet Master is a system that enables designers to rapidly create interactive and autonomous animated character behaviors that react to a main character controlled by an end-user. The behavior is designed by demonstration, allowing non-technical artists to intuitively design the style, personality, and emotion of the character, traits which are very difficult to design using conventional programming. During training, designers demonstrate paired behavior between the main and reacting characters. During run time, the end user controls the main character and the system synthesizes the motion of the reacting character using the given training data. The algorithm is an extension of Image Analogies, modified to synthesize dynamic character behavior instead of an image. We introduce non-trivial extensions to the algorithm such as our selection of features, dynamic balancing between similarity metrics, and separate treatment of path trajectory and high-frequency motion texture. We implemented a prototype system using physical pucks tracked by a motion-capture system and conducted a user study demonstrating that novice users can easily and successfully design character personality and emotion using our system and that the resulting behaviors are meaningful and engaging. 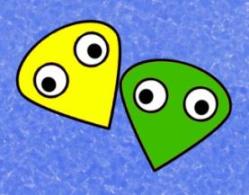 As well as: Takeo Igarashi and Ehud Sharlin