New generation media spaces let group members see each other and share information, but are often static and separated from the physical world. To solve this problem, we propose the AIBO Surrogate—a robotic interface for a media space group, allowing members to extend their group interactions into the physical, real world. Distributed group members see a first-person view of what the robot sees and can control its walking direction, gaze and actions. For members physically collocated with the robot the AIBO Surrogate provides physical presence and awareness: a tele-embodiment of the distributed group. 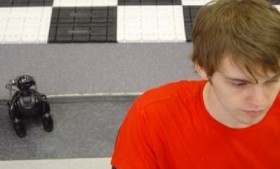