Identifying cybersickness in virtual reality (VR) applications such as games in a fast, precise, non-intrusive, and non-disruptive way remains challenging. Several factors can cause cybersickness, and their identification will help find its origins and prevent or minimize it. One such factor is virtual movement. Movement, whether physical or virtual, can be represented in different forms. One way to represent and store it is with a temporally annotated point sequence. Because a sequence is memory-consuming, it is often preferable to save it in a compressed form. Compression allows redundant data to be eliminated while still preserving changes in speed and direction. Since changes in direction and velocity in VR can be associated with cybersickness, changes in compression rate can likely indicate changes in cybersickness levels. In this research, we explore whether quantifying changes in virtual movement can be used to estimate variation in cybersickness levels of VR users. We investigate the correlation between changes in the compression rate of movement data in two VR games with changes in players' cybersickness levels captured during gameplay. Our results show (1) a clear correlation between changes in compression rate and cybersickness, and(2) that a machine learning approach can be used to identify these changes. Finally, results from a second experiment show that our approach is feasible for cybersickness inference in games and other VR applications that involve movement. 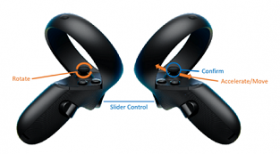