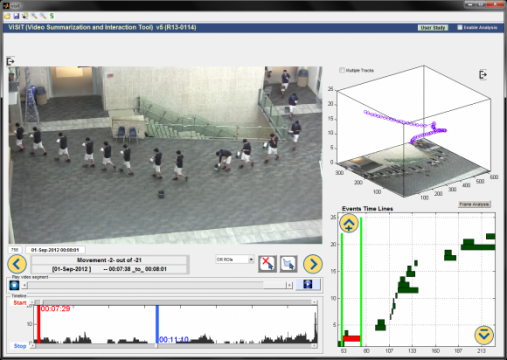 sViSIT (selective Video Summarization and Interaction Tool) is an interactive tool for exploration and visual analytics of surveillance videos through summarization, filtering and visualization of the content in a video.

Surveillance cameras normally record an entire day’s length of activities resulting in very long video footages that makes the process of browsing video content a laborious and time consuming task for a human observer. Fully automated video analysis methods eliminate the need for a human observer and rely on computer vision and machine learning to detect events of interest. However, these methods are not fully reliable particularly when the search criteria are subjective or vaguely defined.

sViSIT is a "human-in-the-loop" system that relies on computer vision algorithms for processing the video data at lower semantic levels (e.g. detecting a moving vehicle in a video) while it uses robust human judgement at a higher semantic level (e.g. speculating whether the driver is impaired or an activity is suspicious). Human interaction is facilitated through advanced visualization, interactive exploration and filtering of the contents.  This process, also referred to as video visual analytics heavily relies on the human-computer-interaction.

sViSIT summarizes and visualizes both the video content and the trajectories corresponding to individual moving objects. sViSIT facilitates user interaction through visual inspection of the video snippets and spatio-temporal filtering of the trajectories. The system generates action shot images (stroboscopic representations of a moving object in a single image) to summarize and visualize the content of each and every movement in a video. It also augments the action-shot images with a space-time cube to visualize the spatial and temporal characteristics of movement trajectories. The system allows users to select regions of interest and filter the events based on the spatio-temporal characteristics of the movements.

sVisit enables queries that (a) have subjective search criteria and are therefore challenging for an automatic vision algorithm, and (b) need acute inspection from an operator, such as: “finding a young man who has entered from a given door and has been loitering around the window”, or “finding if and when a large van stopped or suspiciously slowed down on the bridge”. Such complex tasks are possible primarily using sViSIT’s spatio-temporal querying abilities and action-shot object movement visualization.