We present Contact Augmented Reality (cAR), a form of AR where a mobile device with a transparent display rests on top of the augmented object. cAR is based on the notion that interactions with digital content are enriched by the tangibility of physically moving a device on and off the augmented object. We propose and implement three categories of cAR interaction techniques: contact-based, off-contact and content-aware. We built two cAR prototypes and explore how cAR can be applied to the domain of active reading. A first low-fidelity prototype, consisting of an interactive tabletop and transparent acrylic tangibles, allowed us to iteratively design and test interaction techniques. The second and higher-fidelity prototype, called a tPad, uses a semitransparent touch-enabled 7” LCD display that is placed on top of back-lit paper documents. The tPad uses an external camera and feature matching algorithms to identify the document and to determine its location and orientation. We report on user feedback on cAR, and elaborate on the salient technical challenges for cAR devices. 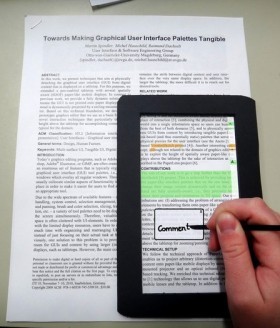