Navigating large workspaces with mobile devices often require users to access information that spatially lies beyond its‟ viewport. To browse information on such workspaces, two prominent spatially-aware navigation techniques, peephole, and direct off-screen pointing, have been proposed as alternatives to the standard on-screen flick and pinch gestures. Previous studies have shown that both techniques can outperform on-screen gestures in various user tasks, but no prior study has compared the three techniques in a map-based analytic task. In this paper, we examine these two spatially-aware techniques and compare their efficiency to on-screen gestures in a map navigation and exploration scenario. Our study demonstrates that peephole and direct off-screen pointing allows for 30% faster navigation times between workspace locations and that on-screen flick and pinch is superior for accurate retrieval of workspace content. 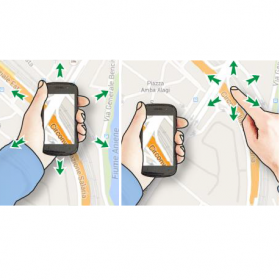