We explore grip and motion sensing to afford new techniques that leverage how users naturally manipulate tablet and stylus devices during pen + touch interaction. We can detect whether the user holds the pen in a writing grip or tucked between his fingers. We can distinguish bare-handed inputs, such as drag and pinch gestures produced by the nonpreferred hand, from touch gestures produced by the hand holding the pen, which necessarily impart a detectable motion signal to the stylus. We can sense which hand grips the tablet, and determine the screen's relative orientation to the pen. By selectively combining these signals and using them to complement one another, we can tailor interaction to the context, such as by ignoring unintentional touch inputs while writing, or supporting contextually-appropriate tools such as a magnifier for detailed stroke work that appears when the user pinches with the pen tucked between his fingers. These and other techniques can be used to impart new, previously unanticipated subtleties to pen + touch interaction on tablets. 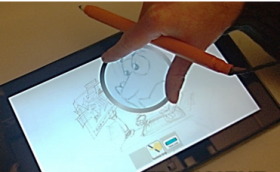