We propose and study a new input modality, WristWhirl, that uses the wrist as an always-available joystick to perform one-handed continuous input on smartwatches. We explore the influence of the wrist’s bio-mechanical properties for performing gestures to interact with a smartwatch, both while standing still and walking. Through a user study, we examine the impact of performing 8 distinct gestures (4 directional marks, and 4 free-form shapes) on the stability of the watch surface. Participants were able to perform directional marks using the wrist as a joystick at an average rate of half a second and free-form shapes at an average rate of approximately 1.5secs. The free-form shapes could be recognized by a $1 gesture recognizer with an accuracy of 93.8% and by three human inspectors with an accuracy of 85%. From these results, we designed and implemented a proof-of-concept device by augmenting the watchband using an array of proximity sensors, which can be used to draw gestures with high quality. Finally, we demonstrate a number of scenarios that benefit from one-handed continuous input on smartwatches using WristWhirl. 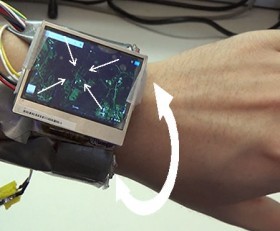 As well as: Jun Gong