Robots are rapidly advancing toward becoming autonomous and skilled entities in a wide
range of environments, and it is likely that more and more people will soon be interacting
with robots in their everyday lives. As this happens, we believe that it is crucial that robots
are designed to be easy to use and understand, reducing the requirement for people and
environments to adapt to the robot. Emerging research in Human-Robot Interaction (HRI)
suggests that people have a strong natural tendency to treat robots as social entities, anthropomorphizing, zoomorphizing, and generally attributing them with social characteristics and
roles. Our approach to HRI is to explicitly focus on the social layers of interaction, building
robotic interfaces that use people’s existing skill sets, and that explicitly attempt to integrate
into familiar social structures. We refer to this approach of directly considering HRI in the
context of the social human world as social HRI.

We present a detailed analysis of social HRI, drawing particularly from selected works in
social psychology and philosophy, and compose a social HRI-targeted theory that addresses
why people tend toward social interaction with robots, how robots can leverage this, and what
the implications are for both users and designers. We present a set of social HRI interfaces we
designed, implemented and evaluated as a means to demonstrate and režect on the practical
and technical feasibility of applying social HRI principles to robot interface designs. We
present the results from several extensive user studies, which we conducted as a means to
learn from our interfaces, and to test, režect on and further develop our social HRI theories. Finally, we distill our overall efforts into a set of some of the very rst social HRI-specic design heuristics.

Overall, our work highlights the importance of considering the broad landscape of social
interaction between people and robots, and the usefulness of explicitly considering social
aspects for robotic interaction design. We hope that by establishing the foundational social
HRI groundwork, this dissertation will lead to and support continuing development of social
HRI theory and new social HRI interface designs as this emerging domain evolves and grows. 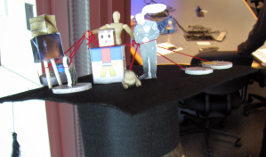