Puppet Master: A technique for designing the actions of interactive agents by demonstration

We present Puppet Master, a system that enables designers to rapidly create interactive and autonomous animated character behaviors that express style, personality and emotions. We created two systems, one is for designing animated character agents, and another one is for designing robotic behavior. We conducted a pilot study with the animated agents, and confirmed that the system enabled the user to intuitively design their behaviors. 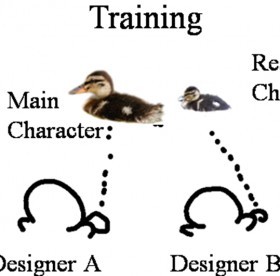