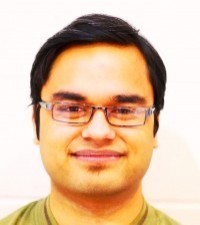 I am a master's student supervised by Dr. James E. Young at the Human-Computer Interaction lab, University of Manitoba. I am working toward exploring how animal-inspired interfaces can be used by robots for communication (e.g. cats use their ears to suggest aggressive and relaxed behavior, dogs use their tails to exhibit happiness, sadness, fear and playfulness, etc.). Presently, I have built a dog-tail interface that leverages people's general knowledge of dog tails for understanding affective states of a robot. Through my research, I aim at providing a set of design guidelines that can be leveraged by Human-Robot Interaction designers for communicating robotic states in an easy to understand way.