We present a new technique for human-robot interaction called robot expressionism through cartooning. We suggest that robots utilise cartoon-art techniques such as simplified and exaggerated facial expressions, stylised text, and icons for intuitive social interaction with humans. We discuss practical mixed reality solutions that allow robots to augment themselves or their surroundings with cartoon art content. Our effort is part of what we call robot expressionism, a conceptual approach to the design and analysis of robotic interfaces that focuses on providing intuitive insight into robotic states as well as the artistic quality of interaction. Our paper discusses a variety of ways that allow robots to use cartoon art and details a test bed design, implementation, and exploratory evaluation. We describe our test bed, Jeeves, which uses a Roomba, an iRobot vacuum cleaner robot, and a mixed-reality system as a platform for rapid prototyping of cartoon-art interfaces. Finally, we present a set of interaction content scenarios which use the Jeeves prototype: trash Roomba, the recycle police, and clean tracks, as well as initial exploratory evaluation of our approach. 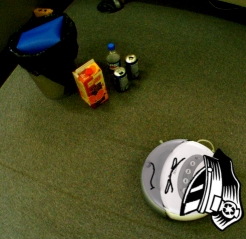 As well as: Min Xin, and Ehud Sharlin