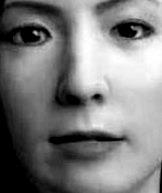 The issue of believability is core to android science, the challenge of creating a robot that can pass as a near human. While researchers are making great strides in improving the quality of androids and their likeness to people, it is simultaneously important to develop theoretical foundations behind believability, and experimental methods for exploring believability. In this project, we explored a visual processing approach to investigating the believability of android faces.

The following image is the set of stimuli;