Crowd sourced crisis mapping is a relatively new phenomenon and platform that enables the collection and visualization of real-time crisis data submitted by users through social media tools and cellular technologies. Crisis maps are generally used by both state and non-state actors for sense-making and as a reference point for action. The current crisis map visualizations only show the location from which documents such as reports or short messages have been generated. Such a limited representation fails to immediately show important content, such as themes from a document and their changes over time. As a result, sense-making becomes time-consuming and cognitively demanding. We present a new visualization approach, Geo-Temporal Tag Visualization (GTViz), that treats the tags on the crowdsourced reports as spatio-temporal textual datasets. GTViz embeds a map to represent the spatial properties of the dataset and compactly shows the changes of key terms from the data source over time. We demonstrate the value of GTViz through two case studies and a controlled user study. 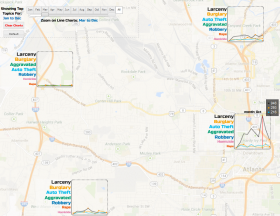