Feature-rich software can be difficult to learn and use, and current approaches to organizing functionality do little to help users with performing unfamiliar tasks. In this paper, we investigate the potential for alternative task-centric interface designs that organize functionality around specific tasks. To understand the potential of this approach, we developed and studied Workflows, a prototype task-centric interface design. Our findings suggest that task centric interfaces scaffold and guide the user’s exploration of a subset of application functionality, and thereby help them to avoid common difficulties and inefficiencies caused by self-directed exploration of the full interface. We also found evidence that task-centric interfaces enable a different kind of application learning, in which users associate tasks with relevant keywords as opposed to low-level commands and procedures. This has potential benefits for memorability, because the keywords themselves describe the task, and scalability, because a few keywords can map to an arbitrarily large procedure. 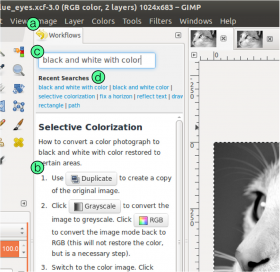 As well as: Ben Lafreniere and Michael Terry