Visualizing Geo-temporal Documents: An Application to Data from Crisis Maps

Crowd-sourced crisis mapping is a relatively new phenomenon and platform that enables the collection and visualization of real-time crisis data submitted by users through social media tools and cellular technologies. Crisis maps are generally used by both state and nonstate actors for sense-making and as a reference point for action. The current crisis map visualizations only show the location documents such as reports or short messages have been generated from. Such a limited representation fails to immediately show important content, such as themes from a document and their changes over time. As a result, sense-making becomes time-consuming and cognitively demanding. I present a set of visualization tools: Geo-Temporal Tag Visualization (GTViz), Geo-Temporal Pies and Geo-SparkClouds that treat the tags on the crowd-sourced reports as spatio-temporal textual datasets and provide interaction tools to explore the content of the reports. I also demonstrate the value of such tools with case studies and a controlled user study. 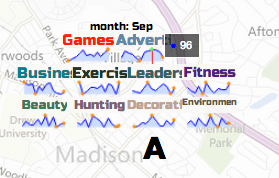