Developing an improved understanding and awareness of how gender impacts perceptions of robots and interactions with them is crucial for the ongoing advancement of the human-robot interaction (HRI) field, as a lack of awareness of gender issues increases the risk of robot rejection and poor performance. This paper provides a theoretical grounding for gender-studies in HRI that illustrates potential dangers of “pink” versus “blue” dichotomous over-simplifications of women and men, and advocates for including potential users of both sexes. We further present the results from an exploratory survey of women and men’s attitudes toward robot development that demonstrates how real-world gender differences on attitudes toward robots go beyond simplistic generalizations. We envision that this work will provide HRI designers with a foundation and exemplary account of how gender can influence attitudes toward and interaction with robots, serving as a resource and a sensitizing discussion for gender studies in HRI. 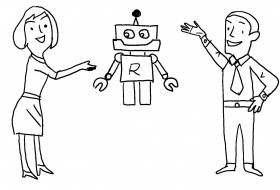