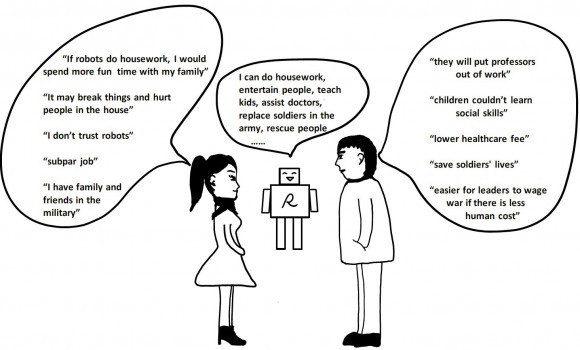 In this project, we investigate how a person's gender impacts their attitudes towards and interaction with robots. Due to limited gender-related knowledge in Human-Robot Interaction (HRI), we explore our problem with a broad multi-faceted approach.

To help map out the broad area and develop a theoretical grounding for gender studies in HRI, we reviewed foundational gender studies related with technology development and adoption. To get an overall glimpse at how men and women perceive robots, we conducted an on-line survey to get general attitudes toward robots in different usage scenarios from various aspects (e.g., perceived usefulness, robot physical design, etc.).

Currently, we are running a laboratory study with a concrete human-robot interaction instance, aiming to explore would people apply gender stereotypes to a robot based on a subtle gendered cue, and how men and women interact with robots. More information will be updated gradually.

Check Your Stereotypes at the Door