Would You Do as a Robot Commands? An Obedience Study for Human-Robot Interaction

This paper presents an investigation into how people respond to a robot posing as an authority figure, giving commands. This is an increasingly important question as robots continue to become more autonomous and capable and participate in more task scenarios where they work with people. We designed and conducted a human-robot interaction obedience experiment with a human and a robot experimenter, and our results highlight the complexity of obedience and detail some of the variables involved, and show that, at the very least, people can be pressured by a robot to continue a highly tedious task. This paper offers an exploration of the ethical challenges of conducting obedience human-robot interaction studies, the results from one such study, and a set of initial guidelines for this area of research.

Download the Would You Do as a Robot Commands? An Obedience Study for Human-Robot Interaction slideshow.

Derek Cormier, Gem Newman, Masayuki Nakane, James E. Young, Stephane Durocher. Would You Do as a Robot Commands? An Obedience Study for Human-Robot Interaction. In Proceedings of the First International Conference on Human-Agent Interaction, iHAI'13. 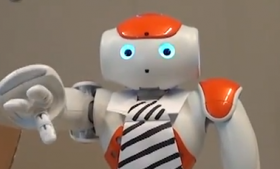 As well as: Stephane Durocher