Please Continue, We Need More Data: An Exploration of Obedience to Robots

We investigated obedience to an authoritative robot and asked experiment participants to do a task they would rather not do. Obedience questions are increasingly important as robots participate in tasks where they give people directions. We conducted a series of HRI obedience experiments, comparing a robotic authority to other authority instances, including: (i) a human, (ii) a remote-controlled robot, and (iii) robots of variant embodiments. The results suggest that half of participants will continue to perform a tedious task under the direction of a robot, even after expressing desire to stop. Further, we failed to find an effect of robot embodiment and perceived autonomy on obedience. Instead, the robot’s perceived authority status may be more strongly correlated to obedience. 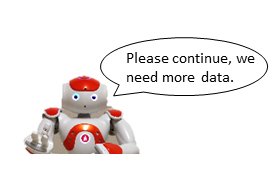