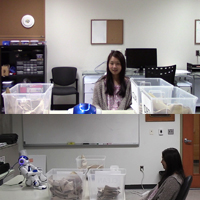 Rapport Strategies With a Collaborative Robot (2018)

Modern industrial robots are increasingly moving toward collaborating with people on complex tasks as team members, and away from working in isolated cages that are separated from people. Collaborative robots are programmed to use social communication techniques with people, enabling human team members to use their existing inter-personal skills to work with robots, such as speech, gestures, or gaze. One particularly important aspect of human–human teamwork is rapport building: these are everyday social interactions between people that help to develop professional relationships by establishing trust, confidence, and collegiality, but which are formally peripheral to a task at hand.

In this project, we developed an origianl scenario design specifically created for exploring gender-related issues surrounding collaborative human-robot teams on assembly lines. Our methodology is grounded squarely in the need for increased gender work in human-robot interaction. As with most research in social human-robot interaction, investigating and exploring gender issues relies heavily on an evaluation methodology and scenario that aims to maximize ecological validity, so that the lab results can generalize to a real-world social scenario.

Furthermore, we investigated how and if people apply similar rapport-building behaviors to robot collaborators. We synthesized existing human–human rapport knowledge into an initial human–robot interaction framework; this framework includes verbal and non-verbal behaviors, both for rapport building and rapport hindering, that people can be expected to exhibit. We reported on a qualitative study that investigates how people use rapport hindering or building behaviors in our industrial scenario, which reflects how people may interact with robots in industrial settings.